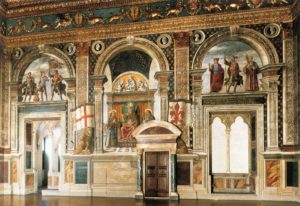 In this room the various councils of the Florentine republic would have met during the renaissance. And off to the left was the little cubicle where we think Machiavelli might have worked. Until he was called upon to sit in on the discussions…

‘So, members of the council, it is agreed, yes? As long as Florence is under the protection of the French King we stand firm against any hint of Borgia aggression or pressured overture of friendship.’

In his seat in the corner, Under-secretary Niccolò Machiavelli notes down the general murmur of approval. Piero Soderini, the elected leader of the republic, is an honourable and principled man, and it is impossible not to respect him. In another era, one of honour and principle, Niccolò thinks, he would make a most successful politician.

‘Under-secretary: if you would stay behind for a moment.’

High on the frescoed wall of the council chamber St Zenobius, the first bishop of Florence, stands with open arms, giving his blessing to good government, a glimpse of the cathedral’s famed dome peeking out from a pillar behind. It pains Niccolò every time he sees it, for this city that he so loves has changed dramatically in the years since the great Domenico Ghirlandaio stood with his brushes on the scaffold. Once respected everywhere for her wealth and stability, she now spends her diplomatic life looking nervously over her shoulder, like a young virgin on the street at night. To survive with her name, if not her purity, intact, what is needed is a government that can temper republican honour with a more pliant pragmatism. But these are not the thoughts that he is paid to deliver. Unless directly asked.

‘Do I gather you have some issue with the decision of the council, Niccolò?’

‘I am its under-secretary, not an elected member, Gonfaloniere. It is my job to advise, not conclude.’

‘Except with you one cannot always tell the difference. So speak your mind.